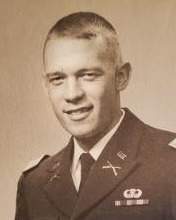 Tim was born in Shawano, Wisconsin on July 16, 1946, a son of the late Florence Nelson Marcks and Thomas Harold Marcks, Sr and he was the husband of Kay Ann Kobs Marcks.

He retired from The US Department of Homeland Security as a TSA officer at Greenville-Spartanburg Airport. He was a Lutheran. He served in the U.S. Army as a First Lieutenant, a Ranger and Paratrooper in the 82nd Airborne during the Vietnam War and was a Purple Heart recipient and a Bronze Star recipient for meritorious combat action in Viet Nam.

In addition to his wife, Tim is also survived by a daughter, Nicole Leclaire of Conn.; a son, Jed Marcks of Inman; a brother, Scott Marcks of Wis.; four sisters, Judy Splitgerber, Pam Mielke, Patti Bohm, Dawn Schmidt, all of Wis.; and two granddaughters, Cameron and Colbie; and many nieces and nephews.

A Memorial Service will be held at 11:00 AM on Friday, September 9th at Seawright Funeral Chapel in Inman. The family is at the home and will receive friends following the service at the chapel.

To order memorial trees or send flowers to the family in memory of Thomas "Tim" Harold Marcks, please visit our flower store.