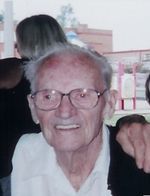 Mr. Brackett was born in Hendersonville, NC on October 12, 1915, the son of the late Tom and Mattie (Clayton) Brackett. He was the husband of the late Alvie (Westmoreland) Brackett for more than 64 years.

He was employed by both Inman Mills and Jackson Mills. He was a member of Inman Mills Baptist Church, a Sunday School member and was also a former deacon in the church. In 2004 he was awarded the Jean Laney Harris Award for The Best Old Time Fiddler.

He is survived by one son Larry Brackett and his wife Linda of Campobello; one daughter Greta Greenway and her husband Alan of Landrum, four grandchildren and seven great-grandchildren and a loving companion Barbara Holloway. Three brothers and two sisters predeceased him.

Funeral services will be held at Seawright Funeral Home, Inman, SC, at 11 AM on Wednesday, May 16th, with Rev. Jack Hames officiating. Burial will be in Gramling United Methodist Church Cemetery.

The family is at the home and will receive friends 1 hour prior to the service at the funeral home.

Inman, SC
To order memorial trees or send flowers to the family in memory of Thomas Ted Brackett, please visit our flower store.