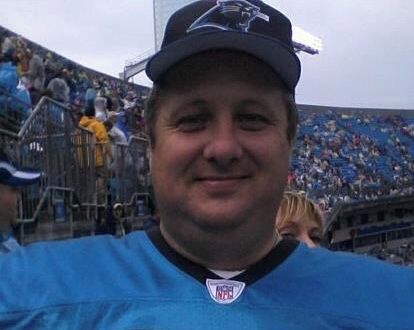 
Niles Leonard "Lyn" Etchison, 47, of 651 Windmill Hill Road Inman, passed away Tuesday, March 5th, at his home. Lyn was born in Spartanburg, SC on June 22, 1971; a 1989 graduate of Chapman High School, attended Mars Hill College and USC-Upstate, being a true Carolina Gamecocks fan. He was employed at DSI Security Services.
Lyn was a fanatical Carolina Panthers fan and he loved Batman from childhood to the present. He loved to make people laugh by telling stories, sharing odd facts, and sending funny memes. He loved history and sharing about his Scottish heritage.
He relished his role of being the dad, brother, and uncle who enjoyed picking on his son and daughter, sisters, niece and nephews: but, he was also their biggest defender. He was a big guy, who appeared tough on the outside, but who had a big soft heart.
He is survived by a daughter; Elizabeth Etchison of Greer, a son; Christopher Greene and wife Sara, of Pickens, his father; Ray Johnson of Inman, and Gibb Etchison and wife Linda of Vancouver, Washington; four sisters; Lisa Johnson Gruenthal and husband, Tom, of Surfside Beach, SC, Jennifer Johnson Lindner and husband, Wes, of LaGrange, Kentucky, Allison Johnson Miller and husband, Joey, of Pauline, Tina Etchison of Lincoln, Nebraska; two brothers, Glen Etchison and his wife, Heather, of Vancouver, Washington, Kent Etchison and his wife, Tanya, of Spokane, Washington; three grandchildren, Lily, Leah, Christopher, Jr., and a number of nieces and nephews. He was predeceased by his mother, Mary McMeekin Johnson.
The family is at the home and will receive friends 1:00 PM to 3:00 PM on Sunday, March 10th at Seawright Funeral Home in Inman. A memorial service will be held at 3:00 PM on Sunday, March 10th at Seawright Funeral Home in Inman, with Rev. Kenny McDowell, Rev. Brad Atkins, and Rev. Ron Jackson officiating. Interment will be in Roselawn Memorial Gardens. In lieu of flowers, memorial contributions may be made to: Alzheimer's Association of Spartanburg, 901 South Pine Street, Spartanburg, SC 29303 or Defenders For Children at their website: https://www.defendersforchildren.org/