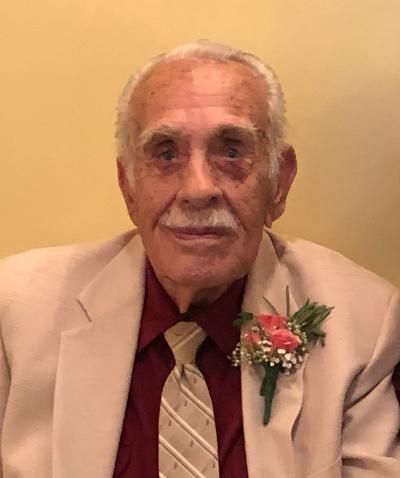 Leroy Cothran, 96, of 227 Holly Springs Road, passed away Friday, July 3, 2020, at Spartanburg Medical Center. Leroy was born in Gramling, South Carolina on April 13, 1924, a son of the late Broadus Cothran and Pearl Gosnell Cothran. He was the widower of Earline Virginia Andrews Cothran. Mr. Cothran was a graduate of Gramling High School, a veteran of the United States Army, having served as a medic during World War II, and a member of Lake Cooley Baptist Church. Leroy was a retired employee of Lyman Printing and Finishing, a member of the American Legion Post #45, and former fire commissioner for the Inman Mills Fire Department.
Leroy is survived by a son, Buddy Cothran and his wife, Doris, of Inman, South Carolina; and a brother, Bobby Cothran and his wife, Linda, of Greenwood, South Carolina. He is also survived by six grandchildren, Michelle Coyle, Todd Cothran, Travis Cothran, Monica Greene, Trey Hawkins and Bonnie Helms; thirteen great-grandchildren and five great-great-grandchildren.
In addition to his parents and wife, Mr. Cothran was predeceased by two sisters; Louise Mathis and Inez Whitmire and one brother, Hugh Cothran.
Graveside Services will be held at 10:00 AM on Tuesday, July 7, 2020, at Roselawn Memorial Gardens in Inman, South Carolina, conducted by, Rev. Monty King. Visitation will follow the service at the graveside.
Memorials may be made to: Lake Cooley Baptist Church, 2591 Ballenger Rd., Wellford, SC 29385.

Seawright Funeral Home and Crematory
www.seawright-funeralhome.com
To order memorial trees or send flowers to the family in memory of Leroy Cothran, please visit our flower store.