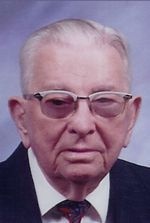 Mr. Lee Roy Loftis, 103, formerly of "A" St.,Inman Mills, died Thursday, February 28th, 2008 at Spartanburg Regional Medical Center.
Mr. Loftis was born in New Prospect, SC on August 20, 1904, the son of the late Joseph Augusta and Mattie (Pike) Loftis and the widower of Dovie Skinner Loftis
He was a longtime member of Inman Mills Baptist Church, the Golden Age Sunday School Class and was active for many years serving many offices in the church.
He had retired as a Dept. Superintendent in the Spinning Dept. of Inman Mills.
Survivors include a daughter, Doris McCarter and her husband Dean of Inman, a son Ray Loftis and his wife Pat of Surfside Beach, S. C. , two brothers, Clyde Loftis and his wife Nora of Birmingham, Alabama, Joseph Loftis and his wife Betty of Easley, S. C. and a sister, Ann Bass and her husband Chuck also of Easley, S. C., five grandchildren and three great grandchildren. He was predeceased by a daughter, Evelyn Fox, grandson, Ricky Loftis, Howard and Virgil Loftis who were raised in the home as his children,and three sisters and two brothers.
Funeral services will be held Sunday, March 2, 2008 at 3:00 P. M. at Inman Mills Baptist Church in Inman with Rev. Jack Hames, Rev. Hubert Maxwell and Mr. Eddie Whitaker conducting the services. The family will receive friends one hour before the service in the church sanctuary and the Golden Age Sunday School Class will serve as Honorary Escort.
Interment will be in Roselawn Memorial Gardens in Inman. Memorials may be made to: the Family Life Center Fund, Inman Mills Baptist Church, 22 B St., Inman, S. C. 29349
The family is at 14 Wofford St., Inman.