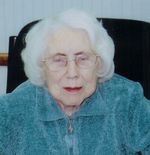 Mrs. Brown was born in Inman, SC on August 15, 1913, the daughter of the late Rowland Herbert and Gladys Walden Bishop. She was the widow of Morris James Edward "Ed" Brown.
Mrs. Brown was a graduate of Inman High School and a 1934 graduate of the University of South Carolina. She was the author of the book "The Early History of Inman" published in 1982. Jimmie Lou Brown was awarded the "Key to the City" in January, 2007 for her contribution to Inman and in commemoration of the 125th anniversary of the founding of Inman. She and her husband owned and operated Brownie's Cleaners and Flower Shop for over fifty years. She was a charter member of both The Inman Junior Womans Club and The Better Homes and Garden Club.
She was a lifetime member of Inman First Baptist Church where she was a member of the Dorcas Sunday School Class. Twenty-four of her thirty-two years of teaching were at Inman Elementary School as a third grade teacher.
She is survived by a daughter, Jimmie Lou Hord of Shelby, NC; a sister, Geraldine Zimmerman of Inman, two granddaughters, Catherine McAllister and husband David of Carey, NC; Rebecca Wyrick and husband Jeff of Greensboro, NC; one grandson, two great-grandsons, Jordan Wyrick and Colton McAllister. She was predeceased by a brother, R. Herbert Bishop, Jr.
Funeral services will be held at Seawright Funeral Chapel, Inman, SC at 2:00 PM on Tuesday, July 3, 2007 with Rev. Bob Wofford officiating.

The family is at the home of Geraldine Zimmerman, 167 Wingo Street, Inman and will receive friends Tuesday 1:30- 2:00 PM at Seawright Funeral Home.

www.seawright-funeralhome.com
To order memorial trees or send flowers to the family in memory of Jimmie Lou Brown, please visit our flower store.