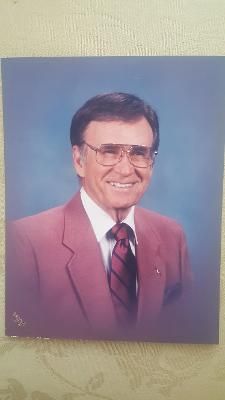 Harold Watson Brown, age 96, of Lexington, SC passed away peacefully at Lexington Extended Care on Good Friday, April 10, 2020 after a brief illness unrelated to COVID-19. He was the son of the late Bertha Genobles Brown and Ernest Brown and the stepson of the late Nannie McBride Brown. Harold was born in Pacolet, SC on September 4, 1923. After graduating from Pacolet High School, he was inducted into the Army and served his country in World War II from 1943 – 1945 as a proud member of 272nd Army Field Artillery Battalion. The 272nd, which was organized by legendary Duke football coach William Wallace Wade, participated in such historic campaigns as the Battle of Normandy, the Siegfried Line Break, the Battle of the Bulge, and the Crossing of the Rhine.

Following the war, Harold married, Nellie (Nell) Hames Atkinson of Jonesville, SC, his sweetheart prior to entering the war. They and their two daughters called Pacolet home until 1960 when they then moved to Johnson Avenue in Inman, SC where they purchased a home on a densely wooded lot with a flowing creek. There, he and Nell through the years purchased property on each side of their home and transformed it into a place of beauty – with azaleas, camellias, roses, a beautiful lawn and two gazebos, which he built, over the creek. He loved entertaining family and friends there. Harold retired from Inman Mills as an electrician. He continued to reside in Inman and take care of his yard until 2017 when he moved to Lexington, SC to be closer to his daughter.

Harold is survived by his daughter; Jan Campbell (Tim) of Lexington, SC; his granddaughters: Kelly Foster (Ryan) of Columbia, SC and Kim Mitchell (Rawls) of St. George, SC; his grandson, Jeff Moore (Lara) of North, SC; four great-grandchildren: Grace, Nolan, and Clara Foster and Wyatt Moore; a sister; Geraldine "Jerry" Spencer of Pacolet; many very special nieces and nephews; and a good friend and neighbor, Gary Koob, of Inman, SC. In addition to his wife and parents, he was predeceased by a daughter, Gail Moore and her husband, Cecil; his brother; Fulton Brown and three sisters: Ruth Fowler, Ernestine "Teany" Varner, and Sherlon Wilkins.

The family expresses their gratitude to the staff of Deepwood Estates, Lexington Extended Care, and Lexington Medical Center for their kind and compassionate care for Harold. In light of the COVID-19 virus, Harold will be laid to rest in a private graveside service in Pacolet Memorial Gardens beside his loving wife of 63 years. Memorials may be made to a charity of one's choice. Seawright Funeral Home & Crematory, Inman, SC is assisting the family. Memories and condolences may be shared at: www.seawright-funeralhome.com.
To order memorial trees or send flowers to the family in memory of Harold Watson Brown, please visit our flower store.