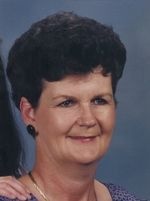 Mrs. Pittman was born in Spartanburg on November 10, 1946 and was the daughter of the late Houston David Ridgeway and Katharine Williamson Ridgeway of Fairforest.

She was the wife of Sammie Lewis Pittman and a member of Anointed Community Church. She was a homemaker. Other survivors include three daughters, Candice Fowler of Arcadia, Angela Byrd of Boiling Springs, Jennifer Guy of Chesnee, a brother, Randall Ridgeway of Greenwood, and four grandchildren, Richard Fowler, Kelsee Byrd, Taylor Byrd, and Alison Guy. She was predeceased by a sister, Faye Boggs.
Memorial services will be held at 4:00pm Saturday, September 1,2007 at Arcadia United Methodist Church conducted by Rev. Steve Foster. An informal gathering of friends and family will follow the memorial service in the family life center at the church.
In lieu of flowers, memorials should be made to The Elaine Pittman Memorial Fund, 335 Sugar Ridge Road, Inman, S.C. 29349 to help offset medical expenses.

Seawright Funeral Home and Crematory
To order memorial trees or send flowers to the family in memory of Elaine Pittman, please visit our flower store.