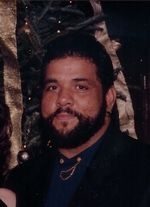 
In loving memory of Billy Oxendine, also known as Bobby Oxendine. God called him home on February 24, 2008 after ten long years of suffering.

Mr. Oxendine was born in Dillon, SC on May 1, 1955 as the son of the late Welch and Rose Barton Oxendine who survives him of Baltimore.
He was the husband of Darlene Inman Oxendine.
Other than his mother and wife, he is also survived by a son, James, daughters, Lena, Vicky, Rose, a stepson, Lee, his siblings Sam, Winky, Jimmy Neil; ten grandchildren, and many other family and friends that will miss him dearly. He was predeceased by his father and his brothers, Jerry and Benny.
He had worked in residential construction and was a member of Dependent Baptist Church in Inman.

A Memorial Service will be held at Seawright Funeral Chapel at 6:00pm on Wednesday, February 27th, conducted by Rev. Joe Geddes and Dr. James Halla.
The family is at the home and will receive friends Wednesday 5-6:00pm. at Seawright Funeral Home.
The family would like to give special thanks to Southern Care Hospice, and extra special thanks to Dr. Halla, Dr. McGee, and all of the wonderful nurses at the Dialysis Clinic on Dillon Drive.

In lieu of flowers, memorial contributions may be made in memory of Bobby Oxendine, PO Box 192 Inman, SC 29349.
To order memorial trees or send flowers to the family in memory of Billy Ray Oxendine, please visit our flower store.